One of the best parts of living in Costa Rica for a year has been having the ability to see a lot of the country. That and fresh mangos. The last place on our list was the Osa Peninsula, and we checked that off over the 4th of July weekend.

We stayed in a cabin that we found on AirBnB just outside of Rincón on the shore of the Golfo Dulce. This was an amazing spot to chill out and Penny and Theda had a great time splashing around in the water.

Splashing around in the gulf 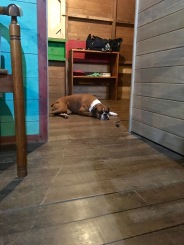 Theda is good at chilling out

Mamón Chino (aka Rambutan) tree by the cabin

Our first full day on the peninsula was pretty mellow. After driving into Puerto Jiménez to explore, arrange some tours, and grab some lunch, we found ourselves back at the cabin by mid-afternoon. Rather than twiddle our thumbs until dinner, Emily had the great idea to drive to Drake Bay. We still had plenty of daylight left, so we all hopped in the car and hit the road. Luckily for us, it hadn’t rained much, so the several water crossings in our path weren’t *too* scary. We didn’t film the trip, but to see the basic idea of what we did you can check out this video.

We made it to Drake Bay!

Our first tour the next day was at Rancho Raices de Osa, a cacao farm in Cañaza about 15 minutes north of Puerto Jiménez. The farm is run by German (pronounced Herman) and the tour was facilitated by his English-speaking daughter, Vanessa. Emily and I were the only ones on the tour and it was a wonderful experience. The leisurely tour had us wandering along a path and learning about the many other plants growing on the farm. Some of these are to exhibit various types of native plants, including poisonous ones and others with medicinal qualities. The tour ended up at a really spectacular rancho in the middle of the property where we ate some delicious food prepared by German’s wife, tasted chocolate, and learned the process of making chocolate. We also tried white pineapple for the first time – they’re super sweet, take a long time to grow, and don’t travel well, so you probably won’t find them in your local supermarket. 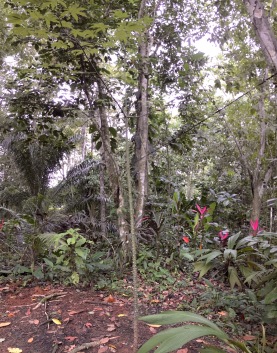 A young ceiba tree (tough to see, in the center)

Busted cacao. Monkeys and birds break these open, then come back to eat the worms that grow inside.

Later that day, we headed into Puerto Jiménez for a sunset kayak tour. We hopped in a double kayak and our guide, Enoch, took us on a trip up and down part of the Rio Plantanares, then out onto the ocean to kayak back into the gulf to see the sunset and wrap up the tour.

Heading up the river 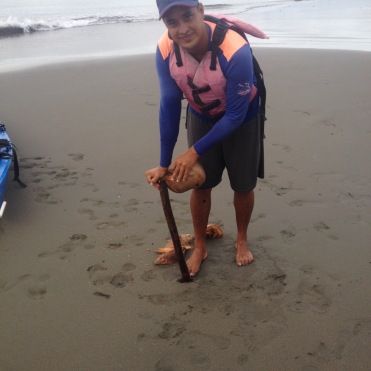 On our way home, we stopped at a bridge over the Rio Tarcoles that has signs that read, “Crocodiles in their natural habitat.” We’d crossed this bridge many times, but never before got out to look. I’m glad we did, since it was totally awesome.

First we spotted a smaller crocodile:

A small crocodile by its lonesome

Then another, much larger one:

Then we crossed the bridge and saw this:

It’s hard to believe it’s been nearly a year since we moved down here. This was likely our last trip exploring Costa Rica. We will miss many things about living here, but we’re looking forward to the adventures ahead on our six-week journey home!