We finally found a place in Costa Rica where it’s cold!

Emily and I were drawn to the mountain river valley town of San Gerardo de Dota by reports of its tranquility, fresh air, and beautiful scenery. It totally delivered.

Based on a recommendation from our friend and Spanish teacher, David, we left earlier than we’d originally planned so we wouldn’t be driving in in the fog/rain/mist. We managed to miss the worst of it, and descended out of the clouds on the Inter-American Highway into the Rio Savegre valley. The drive into the valley is steep and twisty on a road that’s a mix between bumpy dirt and bumpy pavement. Along the way, we stopped in at the restaurant at Dantica Lodge for some delicious pasta and great views of the valley (of which we took zero photos).

We continued down to Cabinas El Quetzal, our home for the weekend, and checked in to our super cute riverside cabin. After getting settled, Emily went to the lobby to borrow a couple wine glasses and we spent most of the rest of the afternoon on the back porch reading and relaxing. Dinner was expertly-prepared trout (a local specialty) along with vegetables and split-pea soup, after which we retired to our cabin and watched Frozen, initially in Spanish (“Libre soy, libre soy, no puedo ocultarlo más…”) until I figured out how to switch the audio to English. 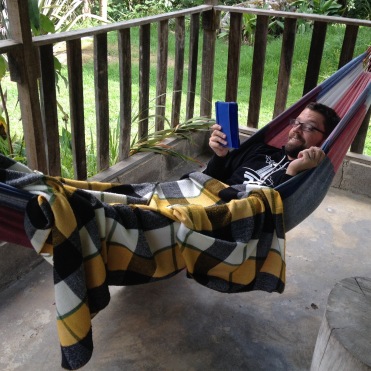 Chilling in the hammock. Not pictured: wine. 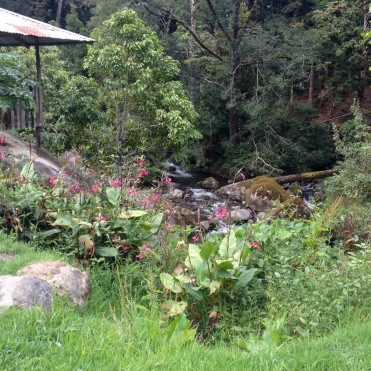 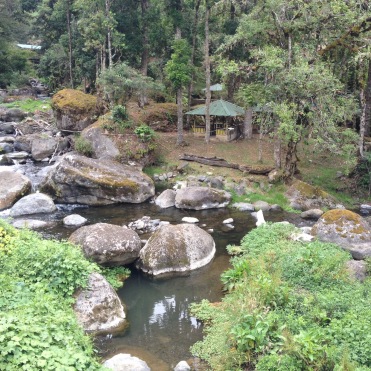 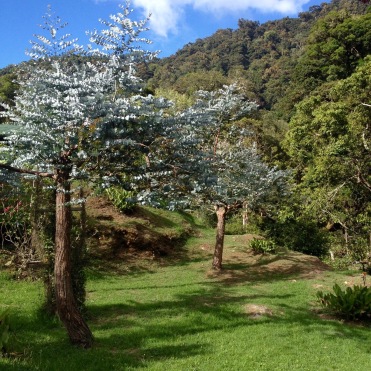 Having planned to take the quetzal tour on Saturday morning, we went to bed early and woke up super early so we could meet our guide along the road at 5:30 a.m. The tour wasn’t described very well. Unlike my experience in Monteverde hiking through the cloud forest and spotting a quetzal, this tour involved standing on the road while the guide whistled a quetzal call and the quetzal responded. After 30 or so minutes of boredom and wondering why we were awake, we hopped in our car and moved down the road with the guide to another, off-road location. Jackpot! We saw four quetzals – two male and two female. We were there with a couple other groups with guides and were probably the youngest by twenty years. Is there a Christopher Guest movie about birders yet? 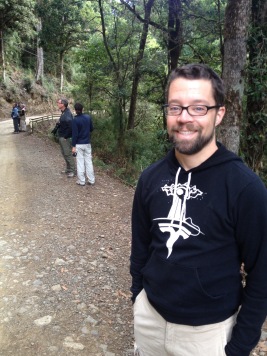 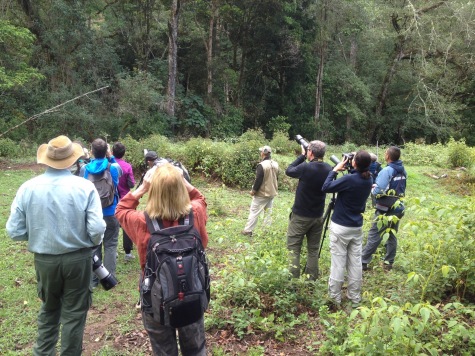 Birders in their natural habitat. 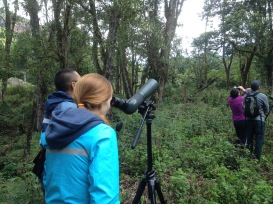 Emily, doing an impression of someone who cares about birds.

Check out those “tail” feathers 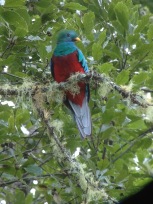 Exhausted after our unusually early morning, we had a pretty mellow Saturday and decided we’d push our planned horseback ride to the next day. Sunday came and after breakfast we hopped on horses at a very reasonable 8:30 a.m. with our guide. This was money well-spent. We rode along the river, crossing back and forth a few times, and ended up at a hiking trail to a waterfall. We hiked just under 1 km in to a small waterfall and cave and turned back to ride our horses back to the cabin. Emily and I had decided on hiking as well, and rather than go up to the unexplored national park on the way home, we opted for returning to the same waterfall hike trail and going all the way. 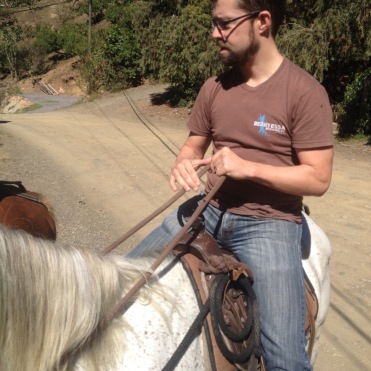 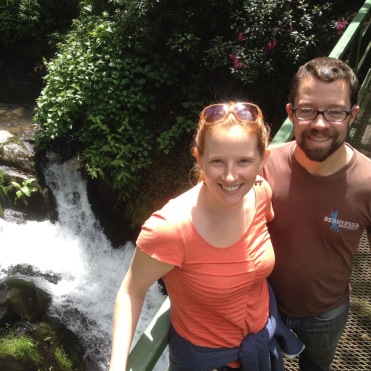 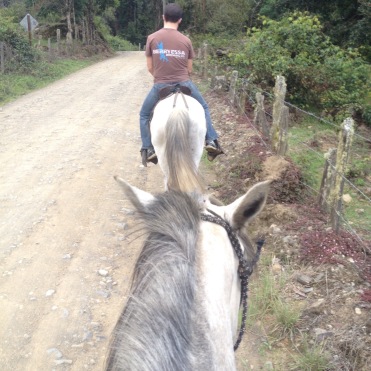 Emily’s view for most of the ride. 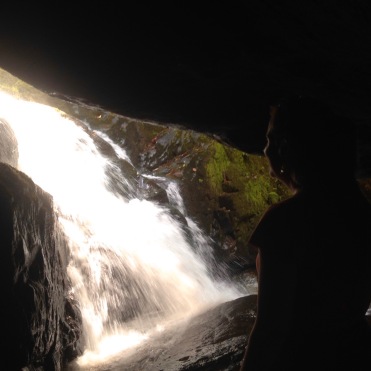 It was about 2 km along a managed, but still slightly treacherous trail to the much larger waterfall. About 3/4 of the way there in, it started raining. It was light at first, then as we got closer to the waterfall it turned into a proper downpour, just like you’d imagine in a tropical cloud forest. We got a look at the waterfall, snapped a quick photo, then hiked back out. Completely soaked, we returned to the cabin and changed, grabbed lunch at a nearby restaurant, then headed home. 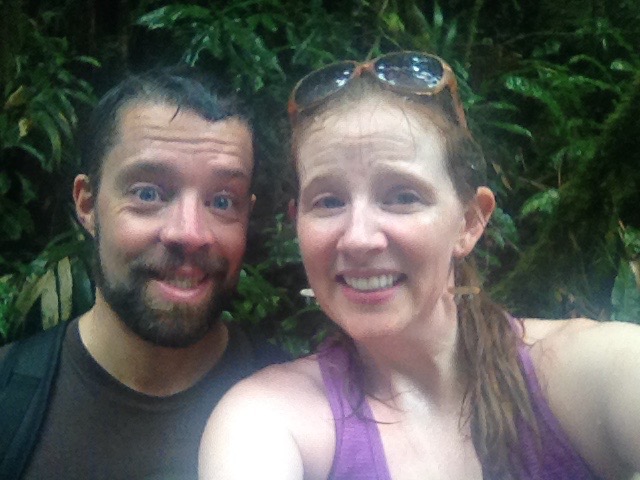 Our lunch is worth mentioning. It was delicious, but more awesome was that even though they couldn’t accept credit cards there and we didn’t have enough cash, they let us order food and then directed us to the Trogon Lodge (affiliated with the restaurant) to run our credit card to pay. It was like a trust fall with money, and we passed the test.

*The factuality of the above statements is not guaranteed.