Friday morning we set our alarm for 3:30 a.m., and took the 40-minute cab ride from Atenas to SJO airport.

A selfie as bleary as we feel

We were headed to Tortuguero, a remote and sparsely populated town and national park on Costa Rica’s Caribbean Coast. Technically it’s nesting season for leatherback turtles, but (spoiler alert) they’re endangered and we didn’t see any.

We flew with local airline Nature Air in a 19-seat twin otter — Andy’s first experience in a small plane. (He did great.) The otter’s giant picture windows and low flying altitude (no pressurized cabin!), coupled with Costa Rica’s not-too-shabby views made the flight a highlight of the whole trip.

The flight from SJO to Tortuguero includes a stopover in Limon, seen here from the air. 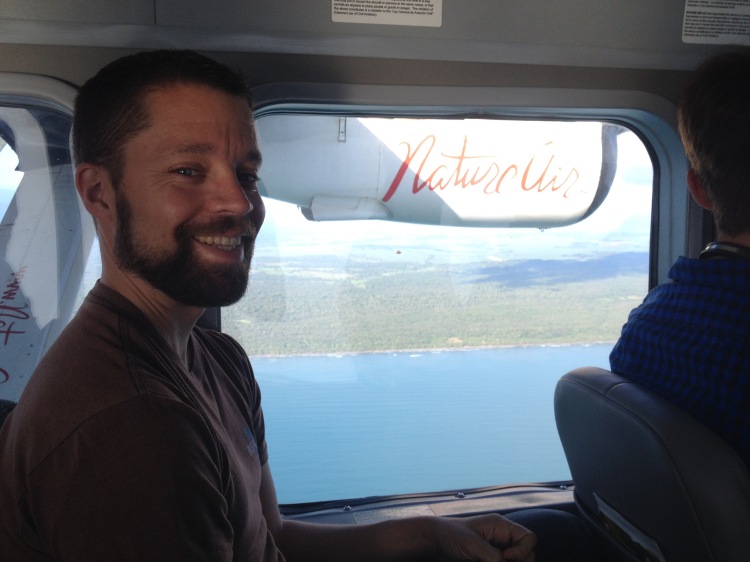 The 15-minute hop from Limon to Tortuguero

Tortuguero from the air 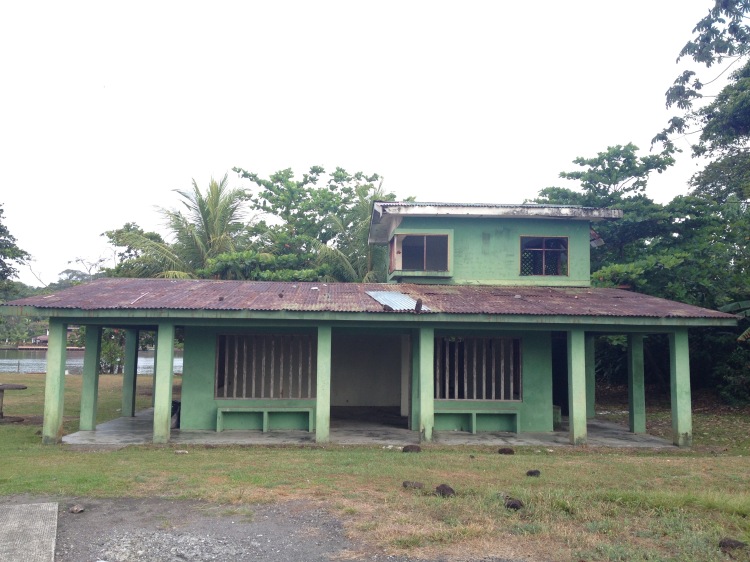 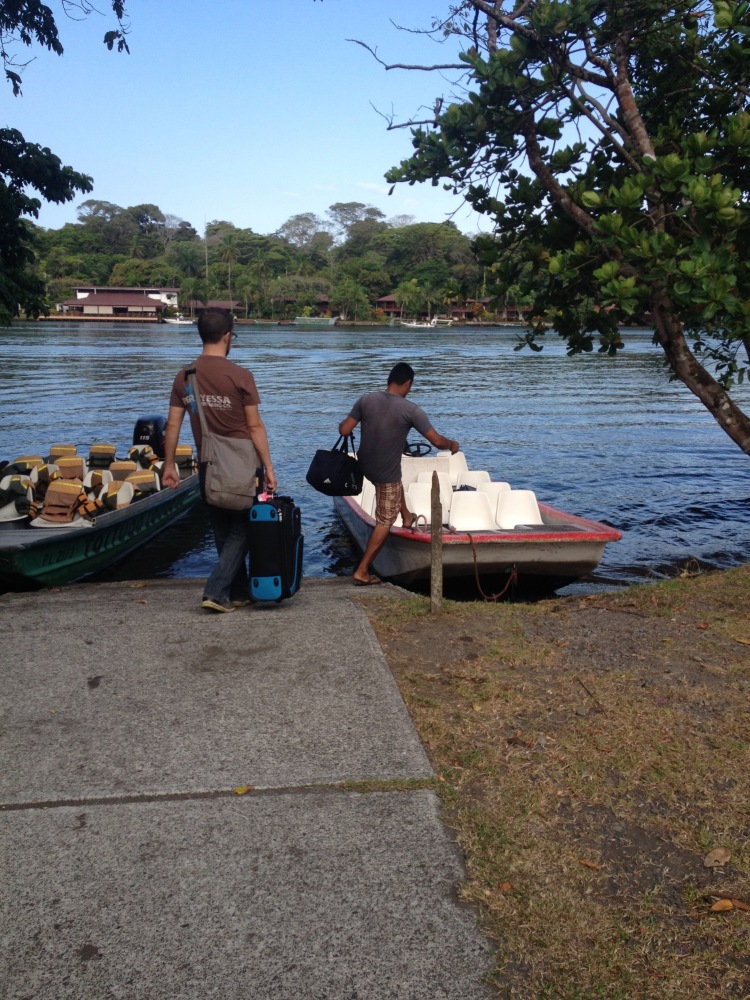 Our taxi driver meeting us at the air strip

We took a water taxi to Casa Marbella, a B&B in town. There are fancier lodges to stay elsewhere along the river, but a water taxi is the only way to get around, so we decided to stay in the town itself. Casa Marbella has a pleasant deck overlooking the river where guests eat breakfast and read or snooze or drink beers in adirondack chairs. Most tourists are from mainland Europe — not a lot of North Americans. 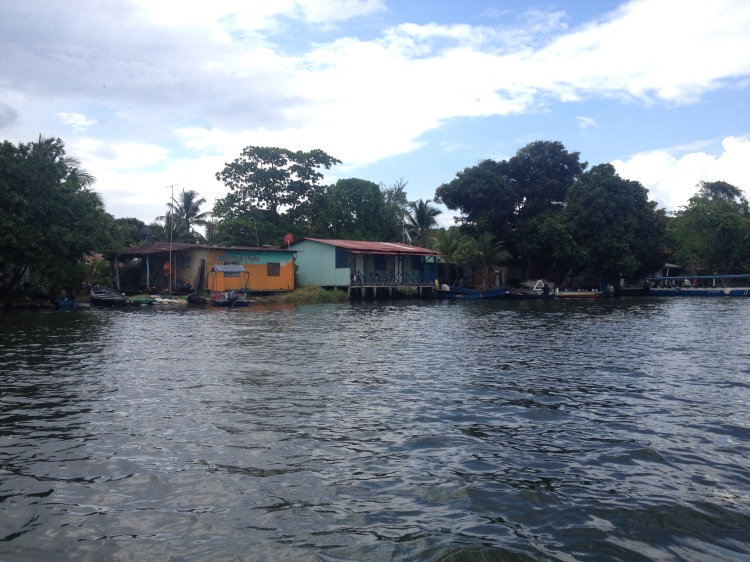 Tortuguero from the river

The town of Tortuguero is full of public art. Most of it is not anywhere near as terrifying as this, the creepiest trash receptacle of all time.

We relaxed most of the first day — had a fantastic Caribbean-style lunch in the garden at Miss Junie’s, Tortuguero’s best-known restaurant, and dinner later that evening at Wild Ginger, which we’d also recommend. The friendly owner was getting ready to close up shop for a couple weeks during low season, so we were glad we got there in time. He encouraged us to pay by credit card, as Wild Ginger is one of the few places in town that accepts them. No one wants to pay the fees, but on the other hand, change is hard to come by in Tortuguero. There are no banks or cash machines there, and tourists bring in large bills, so locals are always scrambling for smaller bills and coins. What’s more, the closest bank is an entire day’s trip up and back down the river. It used to take less time, but the water levels are low, and boats are slow-going. (I’m always amazed and saddened by the real-world implications of climate change.)

Sunset from the deck of Casa Marbella

The next morning we took a guided boat tour of the national park. The boat had a quiet electric motor, so as not to disturb wildlife. Our guide, Roberto, pointed out all kinds of animals that our untrained eyes would never have spotted: monkeys, a sloth, a small turtle, a cayman (like a small crocodile), iguanas, toucans, and lots of other birds.

Cayman hiding in the grass

A female jacana chasing away adolescents so she can mate. Jacanas are polyandrist: the female mates with several males, and the males incubate the eggs and care for the young. Do your thing, girl.

The $15 entrance fee to the park was good for the whole day, so Andy and I went for a hike later that afternoon — a guard almost didn’t let us in because the park closes at 4 p.m., but we must have looked sad because he quickly relented, showed us where the trail started, and told us to be out before sunset. Pura vida. At one point on the trail I stopped to pee, looked up, and saw a spider monkey decimating a piece of fruit not 15 yards away. Communing with nature!

This morning we water-taxied back to the “airport.” The pilot checked us in and the co-pilot loaded our bags. No one asked to see an ID … guess it’s not really a problem around here.

What, no Starbucks? This is an outrage. 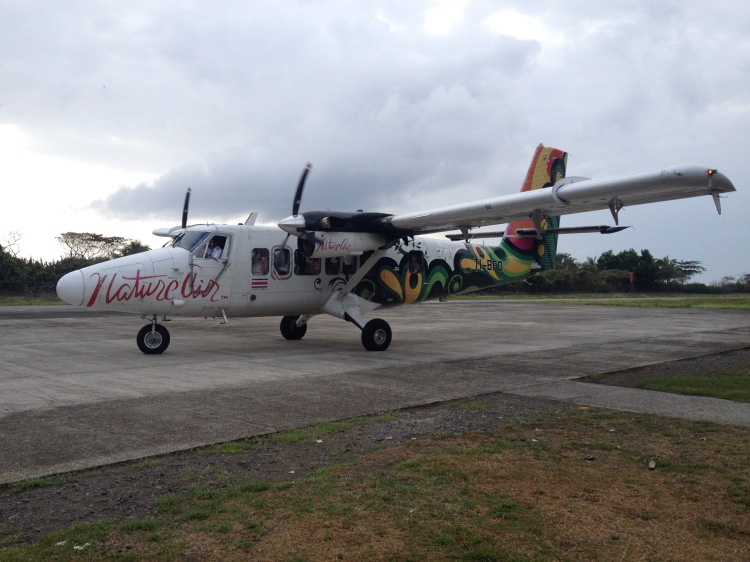 Low season turned out to be a great time to visit, since many places were still open but prices were low and the town wasn’t overcrowded. I don’t know if we’ll get the chance to go again, but if we did return we’d go during green turtle nesting season so we’d be sure to see the area’s namesake. Even though we didn’t see any big nesting turtles this time, we’re still so glad we went.